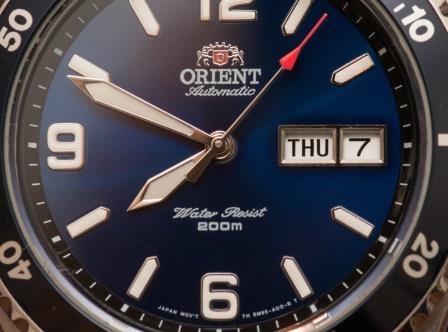 Orient is known to make high-quality automatic timepieces, especially their dive watches for men. In the eye of the quartz revolution, Orient was among the few who chose to stay with mechanical movements, and interestingly, they made them in-house, not by outsourcing.

Despite having to keep competitive prices, Orient always manages to do the job better than competition. Even the cheapest piece of Orient exudes a high level of craftsmanship. While the Bambino is Orient’s most popular dress watch collection, the Mako and the Ray, are wonderful introductions to the brand when it comes to sport watches.

If you are planning to buy a budget dive watch, let’s take a look at these Mako & Ray, as they have got plenty of recommendations from ordinary users and watch collectors as well.

The watch looks much nicer in person, the picture just don’t do its justice. Orient offers 5 variations of the Mako: the matte black, dark blue, orange, yellow and pepsi (blue bezel with a red portion) dial. The Blue & Black Mako are the two most successful versions.Each one is alluring in its own way.

All the Orient Makos have a reflective mineral crystal that will attractively sparkle under the sunshine. The face might get a tad less transparent, but it’s actually not a huge deal.

While the dark blue dial version radiates twinkling glistens when being exposed to a direct light source, the matte black dial version remains cool and muted at any given moment.

The pepsi Mako is a stirring version of the radiant blue Mako, its red portion on the bezel is well matched to the red tipped sweep hand.

The Arabic numberals at the 6,9,12 positions lend focal points to the face, the bar-styled hour indices also make the watch look more elegant than most other dive watches.

Some people said that the Orient logo looks too outdated, but in my opinion, it’s the one factor that gives the Mako an interesting pseudoclassic appearance.

Unlike most other dive watches which just feature one crown for all types of adjustment, Orient dive watches always get an additional pusher at 2 o’clock for day adjustment. I think the watch might be nicer looking without the redundant button occupying the 2 o’clock position, but to be honest, this is one of the most realized differences in design between the Orient dive watches and other brands’ pieces.

The Orient Mako is not only classy-looking, but also appropriate for a wide range of watch-bands. It goes with a brushed stainless steel bracelet or a ribbed rubber strap by default. However, there’re plenty of aftermarket watchbands that can fit in well with the watch’s metal case. The watch looks hefty on a steel bracelet, looks vintage & genteel on a leather band and is military-stylish when going with fabric NATO/Zulu straps.

The Orient Mako features the 46943 self-winding automatic movement, which has the oscillation frequency of 21.600bph (6 beats/sec). Despite being an entry-level auto mechanical, the 46943 is a phenomenal caliber due to its admirable accuracy and reliability.

Orient Ray – an upgraded version of the Orient Mako

Indeed, this Orient Ray is just the old Mako in a new dress. The Ray features the same 46943 caliber with the Mako, these 2 watches just have some minor differentiations in designing.

I personally prefer the Mako’s appearance, except for the bracelet. Orient has made a minor but valuable change in the bracelet’s styling. While the Mako’s band is brushed from A to Z, that of the Ray has two thin shiny lines go along the inner part. This is just a tiny change, but it’s one of the main reasons for customers to choose the Orient Ray over the original Mako.

The Ray does have a special version called “The Ray Raven” as it is black – coated from-top-to-toe. This ion-plating gives a very cool look to the watch, but it is sure to fade or accumulate minor scratches overtime, so you had better consider carefully before making the purchase.

The Orient Mako XL is a 44mm dive watch. It’s much bigger than the original Mako and the Ray which are sized at 40mm. It’s also more expensive, but fortunately, not too much! To be honest, this XL is the simplified version of the small Orient Mako.

The watch really looks much more simplex than the original Mako. The enlarged lugs give the Mako XL a boxy shape, thus it appears to be a heavy-duty tool watch rather than a genteel versatile timepiece like the small Mako.

I think 40mm is a perfect size to suit a wide range of wrists, so the Mako XL is made for a minority of users prefer a big boxy-shaped watch with hefty finishing, the original might be too elegant to some.

Despite having a much larger case, the Orient Mako XL still shares the same automatic movement with the Ray and the original Mako, so in terms of time keeping, they ‘re no different.

Despite not being ISO6425-certified, these Orient dive watches for men are still worth your hard-earned money & your trust, because they meet all the standards required for a pro diver’s watch. You don’t need a certification just to trust Orient’s craftsmanship.

It’s hard to choose a dive watch which is not only affordable, but also reliable and nice-looking, Orient is among the few who can offer you such cheap but well-finished timepieces like that.