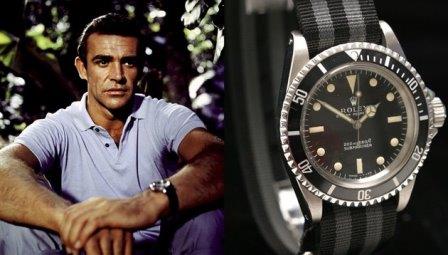 There is no character more popular for his political, cultural, and social influence than the immortalized British Secret Service agent, James Bond. The debonair Agent 007 has graced the screen for decades, earning his place as one of the most iconic figures in cinema and pop culture.

The agent and his watch

As a cultural icon for both classic and modern espionage, another popular affiliation with the character is his prominent use of a select few luxury brand watches, an association deeply tied with the agent that has made watch enthusiasts from all over wonder and revel at these timepieces.

What better way than to start with the first ever silver screen adaptation of Ian Fleming’s James Bond. The famous agent was first personified by Sean Connery, marking the first of a long list of the series featuring the iconic MI6 secret agent.

In this film, the first watch to grace the movie is actually from Gruen, before the more popular Rolex Submariner shows itself later on.

The Rolex submariner is a fitting choice as it was the first dive watch from the brand and it fit the active lifestyle of James Bond. As it appeared on numerous other Bond films, the watch has been dubbed affectionately as the James Bond Submariner watch.

This movie is Roger Moore’s debut as the famous secret agent James Bond, and is featured as the eighth Bond film. Despite having a different Bond, the film was met with praise and was a box office success.

A featured timepiece from this version of James Bond was the Rolex submariner 5513. There were various functions added into the watch, showcasing the technologies developed by Q at the dispersal of Agent 007.

Besides the Rolex Submariner, Hamilton’s Pulsar debuted, showing the entry of the quartz era of watches. The Hamilton Pulsar LED watch showed a unique take on the agent’s choice of watches, showing off the digitalization and changing era for watchmaking.

Coming back as James Bond for the third time, Roger Moore once again played the iconic Agent 007 who then aims to stop megalomaniac Karl Stromberg from destroying the world to create a new society underwater.

This film is a revolution on its own for the agent’s watch choice as he donned a different brand throughout the film. With its printing technology for message transmission from M, Seiko’s LC Quartz was a suitable and digital choice for the quartz generation.

As a new era of the Bond films start once again, the character is placed under Timothy Dalton, who also sported a new brand of watch for the secret agent. The film features Bond as he finds himself trying to stop an arms dealer from potentially shaking the world through another world war.

Besides featuring a new actor for playing the MI6 agent, this is also the first time TAG Heuer was used in any Bond film, joining the list of timepieces used since 1962. It was especially difficult to pinpoint the watch as promotion of timepieces was not yet prominent during this time.

Marking the 17th spy film in the Bond series after a 6-year hiatus, GoldenEye features Pierce Brosnan’s debut as Agent 007, preventing a rogue MI6 agent from wreaking havoc on the global economy and financial market.

This film also debuts the brand Omega in what will become a strong relationship spanning 20 years between the brand and the series. In this introduction, the Omega Seamaster takes stage, showcasing its distinctive blue dial and a steel bracelet.

The choice for Omega over Rolex came after consideration that Royal Navy divers wore Omega Seamaster timepieces in the 1960’s, influencing the decision that would spell opportunity for the brand’s growth. Even today, Daniel Craig sports Omega timepieces in all of his films, a testament to the strong relationship of the brand to the series.

Throughout the entire James Bond history, his style is often marked with sophistication and class. From his clothing to everything he wears, it is often associated with his special taste. For his watches, a general rule is that it has to be a type of watch that presents high-quality with advanced features.

A Bond watch must be capable of both donning his style while enduring the intensity of his actual life. It must be classy, yet durable as a watch of quality. They are also testaments of the continuing changes in horology and watchmaking market through the years, growing and changing through each new technology, target, and special innovations.