SRP309 – Seiko Orange Monster Generation 2 – What makes it different from the first Monster?

Seiko Monster dive watches have been popular for many years. Following this success, the Japanese watchmaker launched an upgraded version of this series, called the Monster Generation 2. These new Monsters have some significant functional improvements without major changes in design. Seiko aimed to label the Monsters as heavy-duty watches. The Orange model with stainless steel bracelet is the most typical for the series’ concept. So in this review, I choose the Seiko Orange Monster SRP309 to be the reviewed sample. 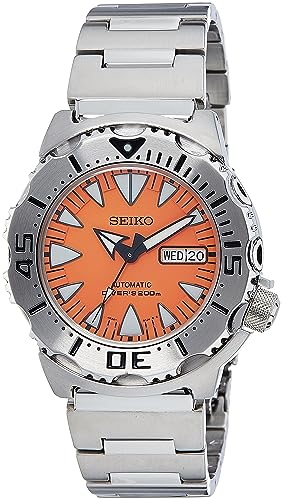 Literally, the Seiko Orange Monster is a true armored tool watch, its robust finish may not be suitable with everyday wear, but this tank-like design is ideal for a scuba diving watch. Although the Seiko Monster looks like a massive watch in pictures, it actually has a perfect size.

Featuring a 43mm case, the watch is appropriate for a wide range of wrists. The orange tone makes the dial looks fresh and vivid, but it also steals the exquisite appearance from the watch. The Black Monster SRP307 has a more neutral tone, but it lacks a remarkable impress.

Emerging from the watch face is the sloped unidirectional bezel. Despite its rugged exterior, this bezel is extremely smooth and well damped in operation, the hollows around the frame make for a good grip. The engraved timing marks are painted in black, contrast with the brushed stainless steel bezel to offer superior legibility. The luminous pip lines up pretty well with the 12 o’clock marker.

The new Seiko Monster SRP309 is also called “Vampire” due to its teeth-shaped luminous hour marks. This is one of the biggest differences in design between the original Orange Monster- SKX781 and its heritage model – SRP309. The 3 o’clock position is occupied with a day/date aperture.

Unlike Orient dive watches which have an exclusive crown for weekday adjustment, Seiko dive watches only have one crown for anything, from day/date adjustment to time setting, and even manual movement-winding. The versatile screw-down crown is positioned at 4 o’clock. It is checkerboard-knurled instead of being ridged like that of the old SKX781.

The 20mm metal bracelet doesn’t taper down from the lug to the clasp. The case-to-bracelet transition is very smooth thanks to the chunky lugs, lending integration to the watch’s body.

Connecting the links is the pin-and-collar system, which is secure and reliable, but also difficult to adjust. Since the Monster is designed to be a pro diver’s watch, it features a double fold-over clasp with 2 pushers to better avoid any accidental detachment underwater.

When you take on a wetsuit, in all probability, the band will get too tight-fitting. Therein, the diver’s extension next to the clasp would help you to broaden the band a little bit. The diver’s extension suffices to show Seiko’s intention to create the Orange Monster as a fully featured dive watch, not just a desk-diver’s timepiece.

The Monster’s overall design is rather rugged, but it doesn’t mean Seiko didn’t pay attention to details. For example, take a look at the whole watch and you can see the sophisticated mixture of the brushed and polished metal surfaces.

The most vulnerable parts, such as the bezel top and the bracelet’s outer links, get brushed for the avoidance of minor scratches. The bezel’s lateral and the inner links, on the other hand, have polished surfaces to add some appealing flares to the watch.

Due to its boisterous look, the Seiko Orange Monster can only fit in well with sporty outfits, it’s not suitable with formal wear. For those who don’t like the stock band, an orange fabric or bright-color calfskin strap are also good options.

Although the SKX781 and the SRP309 models just have some slight differences in designing, their insides are absolutely dissimilar to each other. The old SKX781 features the 7S26 caliber. This 21-jewel automatic movement is non-hacking and self-winding. It is a real workhorse, but its features are too basic.

That was the reason why Seiko tried to refresh their Monster line with a total new movement – the 4R36. The number of jewels grows from 21 to 24 due to the increased structural complication. The new 4R36 movement is not much more accurate than the 7S26, but it has some technical improvements. It’s hackable and hand-winding.

The hand-wind feature is very useful for those who get more than one auto watch. You don’t need a separated auto winder to keep your SRP309 working when not being used.

The 4R36 is a highly-accurate movement, you can expect it to gain or lose 9 to 10 seconds per day. It’s worth noting that the 4R36 is not a high-frequency caliber, it only has an average rate of 21.600 bph, but its real performance is outstanding.

ISO6425-certified, the Seiko Monster is a true scuba diving watch

ISO 6425 standard is a set of conditions required for a typical diver’s watch. All of the Seiko’s dive watches have been put through this test, that’s why Seiko can confidentially mark their products as “diver’s 200m” instead of “water resistance 200m”.

The Monster’s domed hardlex glass is inserted a little lower than the bezel, making the watch more crack-resistant.

The LumiBrite technology is among Seiko’s greatest prides. This new kind of luminescent coating is absolutely free of radioactive substances and more environment–friendly than conventional luminous paints.

The lume on Seiko dive watches can last up to 5 hours after being exposed to a strong light source for 10 minutes. The glow intensity is very powerful, too. The lume color is prone to the robin’s-egg blue rather than the pure green, it’s so refreshing to see something like this on an affordable dive watch.

Seiko is the most favored brand when it comes to affordable but fully featured dive watches. The new Orange Monster SRP309 has a quite cheap price compared to the true value of the watch.

The Seiko Monster has a lot of variations, the 2 most common are the black and orange dial versions with stark white hour marks. The Seiko Monster is not the type of dressy desk-diver’s watch, you shouldn’t treat it as a fashion item, but a downright tool watch instead.