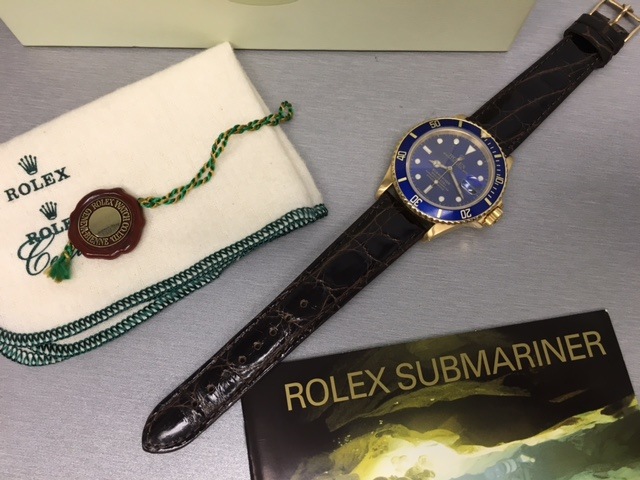 When it comes to dive watches, most people will immediately think of the legendary Rolex Submariner model. Classic, elegant and luxurious, the Submariner line is among the most wanted wristwatches in the world.

Rolex started making the first version of this model in 1953. One year later, it was showcased in Basel watch fair. It is controversial whether the first model was reference number 6204 or 6205. Actually, they look almost identical. Neither of the distinctive “Mercedes” or “cathedral” hands was applied. Rolex just used usual “pencil style” hands. Unlike the 2013 version with a diameter of 44mm, the original 1953 Rolex Submariners had a diameter of only 37mm. It was water resistant to just 100 meters.

In 1954, Rolex also produced a small number of Reference 6200 Submariners. Those were the first Submariners to use the “Mercedes” and “cathedral” hands. They had a self-winding caliber A296 and a water resistant depth of 200 meters. Ref.6200 also featured an oversized crown. Only after the end of 1954 had Rolex put “Submariner” on the dials and crown guards.

Within a few years, Rolex has produced many new versions of the Submariner, with improvements on the calibers and design.

In 1955, they released reference number 6538 and 6536 which are successor of reference 6204 and 6205 respectively. These successors were both installed with the caliber 1030. The 6536 had a Chronometer version, the 6536/1. This year also marked a milestone in the history of the Rolex Submariners line. Reference 6538 was chosen by British Royal Navy.

In 1956, Rolex changed their design for the hands, the luminous circle was moved closer to the center of the dial. The bezel received a minute index for the first quarter. The reference 6538A was introduced with the same case as reference 6200, but the movement inside was the caliber 1030. In the same year, reference 6536 was released with a red triangle mark on the bezel. The reputation of the Rolex Submariner was reinforced by the choice of Royal Canadian Navy.

Those Submariners used either gilt or gilt/silver gilt printing on glossy black dials. Luminous marks were painted by radium paint.

The next generation of Submariners, the 5512 (1959, chronometer version) and 5513 (1962, non-chronometer version) marked a noticeable change in the design of Rolex. Shoulders, guards were added to the crown, to protect the winding mechanism. This feature has become a standard feature of the Submariner. Since these versions, luminous marks have been painted by tritium-infused paint instead of radium paint.

In 1956-1966, Rolex stopped using gilt/ silver gilt dials on the Submariner and turned to white printing. By the end of the 1960s, Submariners had become one of the most popular product lines of Rolex.

Since then, there have been some innovations in design and caliber: